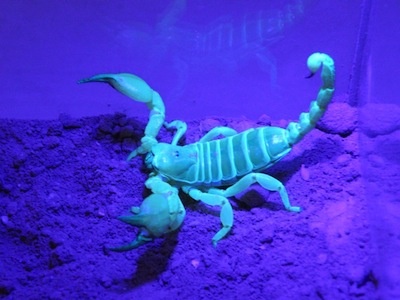 Who knew scorpions were fussy about architecture?

Ecologists at Israel’s Ben-Gurion University of the Negev can shed some light on the matter.

The team tracked large-clawed scorpions to their burrows in the Negev Desert. After removing the scorpions, the team poured molten aluminum down each burrow.  When the aluminum cooled, they chipped everything else away, and voila!  They had a casting of the burrow.

They analyzed each casting using 3-D scanning equipment and software.  Turns out all scorpion lairs have the same design!  They’re tract burrows!

Each starts with a short vertical drop.  Then comes a level area.  This is likely where the cold-blooded critters warm up before emerging for their evening hunt.  Next comes a longer drop.  Then, at the bottom, a cool, damp chamber to beat daytime heat.

Such a complex and standard design likely evolved through natural selection.

That, or maybe the scorpions were studying photos of Sting’s house!