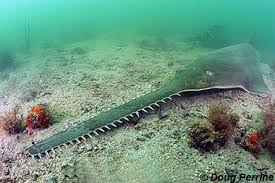 Don’t have a date? Or a mate? No problem!

Animals sometimes go solo. Why? Because they can reproduce without mating: virgin birth!

Technically, it’s called “parthenogenesis.” Instead of DNA from mom and dad, offspring just have mom’s DNA. So it’s half as diverse as normal. Most species that can do this are invertebrates. Vertebrate parthenogenesis is rare. Resulting offspring rarely live long.

That’s why marine biologists in southwest Florida were surprised recently. They were analyzing DNA collected from a critically endangered species, the smalltooth sawfish. Due to dwindling numbers, sawfish have few potential mates. The researchers wanted to know if they were reproducing with close relatives.

Turns out, DNA from seven sawfish, all female, was half as diverse as it should have been. Hello, parthenogenesis!

What’s more, these were healthy fish, perfectly normal and thriving. What gives?
The researchers don’t know. They encourage other scientists to screen their DNA databases: More instances might exist.

We say: Sawfish, use Tinder! Hard to swipe left, though, with fins.