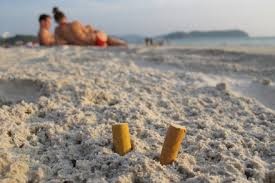 This is Sandra Tsing Loh with the Loh Down on Science, saying no, we don’t mean too-small G-strings at the beach.

Cigarette butts are the most common form of litter on beaches. Volunteers cleaned up more than 2 million of them from the world’s beaches in 2014. Used cigarette filters hold nicotine and other toxins that could hurt marine animals—like ragworms. They’re burrowing critters that live in beach sand.

Scientists placed ragworms in water drenched in nicotine from cigarette butts. It didn’t go so well. The worms lost weight and showed significant DNA damage. And they developed a hacking cough. No—but the other health effects are no joke.

The team also mashed up cigarette filters, scattered them in sand, and let the worms munch away. Surprisingly, the worms that ate the filters showed no ill effects. Their digestive tracts probably broke down the nicotine right away. They got 500 times less nicotine than the worms in the first experiment. Those guys absorbed nicotine through their skin.

So please, folks: Watch your butts at the beach. Both kinds!