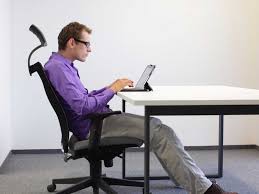 Maybe you’re sitting in the car now. And odds are you’re on your way to sitting at a desk for eight hours. Could all this sitting be worse than you think?

Enter Keith Diaz at the Columbia University Medical Center. He and his colleagues wondered– is sitting the new smoking?

To find out, they attached motion sensors to belts tracking people’s daily activity. Volunteers were of various health backgrounds, education levels, races, and genders. Nearly eight THOUSAND Americans over age forty-five were tracked for an average of SIX years. During that time, four percent of the individuals died of various causes.

The researchers found that the people who died were more sedentary. This was true for ALL groups of people regardless of health history. The more time people spent sitting, the more likely they had died. Also, the LENGTH of individual sitting sessions seemed to matter.

So — stuck at a desk job? Opt for a standing desk! And if you must sit, the doctors recommend getting up every 30 minutes.

As for me—I’m going to try to work less. I’ll let you know how that turns out!