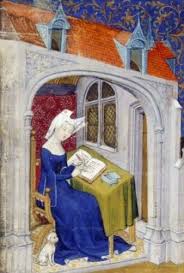 Hey…do I have something in my teeth?

Dental records are often used for identification. What other tales can our teeth tell about us??

Christina Warinner at the Max Planck Institute and fellow researchers picked through some plaque history. While digging through the teeth of an eleventh century religious woman, they found blue particles. Natural blue pigments are rare. In medieval times,, lapis lazuli was one source. But it was expensive, and only used by highly skilled scribes and painters – who were mostly men

So how did blue stuff get into a German woman’s teeth? To find out, they analyzed the plaque.

Findings? The elements found in the dental particles matched lazurite crystals used in medieval paintings. This told the researchers this woman was highly involved in paint preparation and book making. Currently, documentation of female monks and monasteries is lacking. Perhaps this woman was a monk baring her heart, and teeth, for her illuminated manuscripts!

The researchers hope their medieval dental exams can tell us more about religious women of the time.

Maybe MY teeth will leave a mark on history too! Oh wait…that’s just spinach.