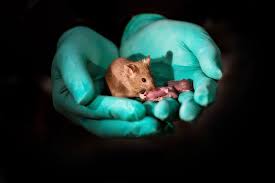 Is it the end of men?

Men. Who needs ‘em! Not some female sharks, spiders, and komodo dragons. They can create babies on their own.

Mammals are different. For us, certain genes important for embryonic development are turned OFF in mom but ON in dad. And vice versa. That’s why mammalian babies need two OPPOSITE sex parents for a full set of functional genes. Until now!

Enter researchers Zhi-Kun Li and Bao-Yang Hu from the Chinese Academy of Sciences. They took stem cells from one mouse mom, deleting the set of genes that were already turned off. Then, they injected these stem cells, just like sperm, into eggs from a SECOND mom. This egg was then implanted into a surrogate mouse–that is–mother number three!

Turns out, fiddling with those genes ELIMINATED the need for a dad! The surrogate gave birth to healthy mouse pups. These mice later had babies of their own.

As for humans, for now, men can stick around. If only to run out and get the ice cream!