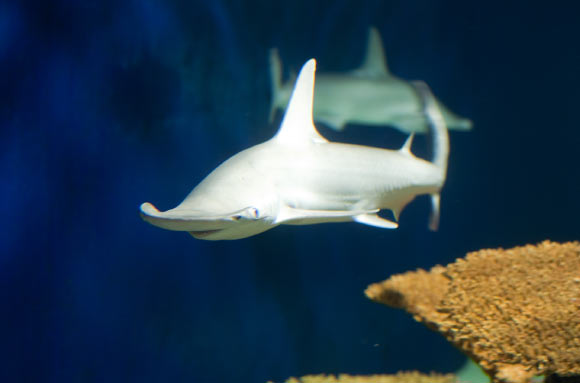 Have you ever met a shark who’s a….vegetarian?

Okay, so maybe not a STRICT vegetarian. But there IS a shark who eats more seagrass than fish! It’s the bonnethead shark—a small relative of hammerheads.

Samantha Leigh and her colleagues at the University of California – Irvine are studying its bizarre feeding habits.

They took bonnethead sharks into the lab and fed them almost exclusively seagrass. It turns out that bonnetheads have enzymes, or digestive juices, specifically for breaking down seagrass. In fact, they digest HALF of the nutrients in seagrass. This is on par with sea turtles, who are known omnivores and sometimes even herbivores!

So… why is this news making waves?

Sharks impact ecosystems that we depend on for food and economic resources. Since this shark eats its veggies, it shouldn’t be considered a “top predator” in food web models. Instead, it may play an important role in transporting nutrients throughout the ecosystem. Understanding how will help us conserve those seagrass meadows through management and habitat conservation.

I guess bonnetheads really took the motto “fish are friends, not food” to heart!