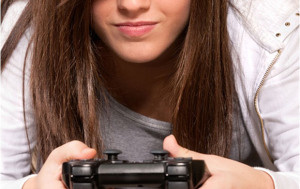 Kasumovic’s team pre-recorded comments to play back. They taped both male and female voices making neutral comments like, “Nice shot!” And: “Good game, everyone.” Then they played the game, sometimes commenting to opponents using the male voice, sometimes using the female voice.

The evolutionary explanation for this? Low-status males, afraid of losing face with other males, bully females.

Maybe those guys should just chill out online and watch cute cat videos. Works for us!