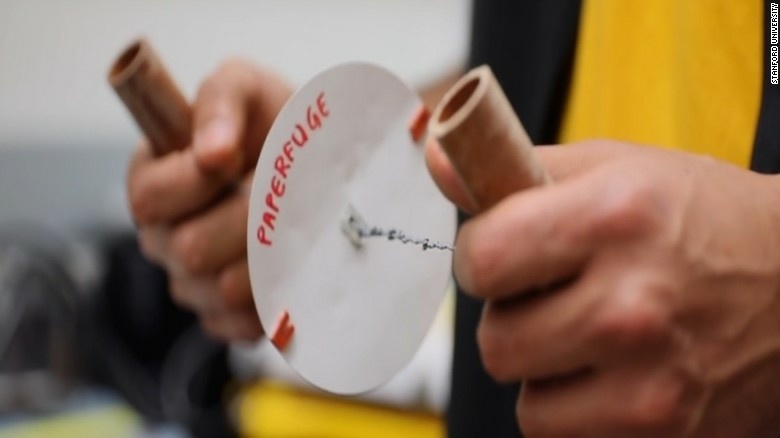 The centrifuge is an essential lab tool. It’s like a really powerful salad spinner. It can separate fluids into layers based on their density. Centrifuges are critical for diagnosing diseases like malaria. But they’re expensive and require electricity. That can be a problem in remote areas.

Stanford bioengineer Manu Prakash wondered – could a TOY be the answer?

Enter the whirligig! An ancient toy made by threading string through a button. Rhythmically pulling the string makes the button spin. Hours of prehistoric fun!

Using high-speed video, Prakash found that a whirligig spins at fifteen thousand rpm. Fast — but not fast enough for medical use. By studying whirligig physics, his team created a SUPER-whirligig! This prototype can spin ten times FASTER than the toy. And it’s made of PAPER!

Prakash calls it the paperfuge. It costs just twenty cents and can separate blood into its components in ninety seconds! Best of all? It’s powered entirely by human hands! No electricity needed!

How’s that for a medical REVOLUTION?