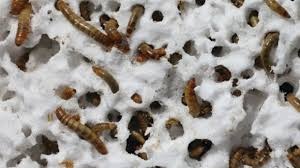 Worms have a taste for coffee cups? Who knew?

Styrofoam and other plastics can take over hundreds of years to degrade. Yeesh! Is there a way to make them go away faster?

Stanford researchers may have a solution – mealworms. These critters are the larval form of the darkling beetle. And would you believe they have microorganisms in their guts that can break down Styrofoam? It’s true!

In the Stanford study, one-hundred mealworms ingested a small pill’s worth of Styrofoam per day. Within twenty four hours, they excreted the waste as fragments that looked like rabbit droppings!

It may be awhile before mealworms are deployed to plastic waste heaps, though. While the worms degrade half the plastic they ingest, they release the other half as carbon dioxide. That’s a greenhouse gas and a major contributor to global warming. Mealworms would do the same with any food source, but it’s still something to keep in mind.

Future work will assess whether mealworms can degrade other types of plastic besides Styrofoam, too.

Until then, keep chowing down, mealworms. This cup’s for you!