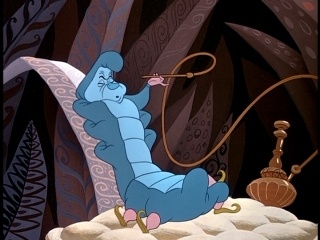 This is Sandra Tsing Loh with the Loh Down on Science, saying: Go ask Alice! Or ask Matthew Johnson, of Johns Hopkins University School of Medicine.

His study enrolled 15 volunteers who had been smokers for an average of 30 years. All had tried – and failed – to quit multiple times.

Subjects took a 20-milligram dose of psilocybin, the hallucinogenic ingredient in so-called “magic mushrooms.” They then relaxed in a darkened room, listening to groovy music. All were closely monitored to ensure nobody had a “bad trip.” Two or three more sessions followed, combined with behavior-modification therapy.

After 6 months, 80 percent of the participants were smoke-free. That’s over twice the success rate of other stop-smoking methods!

The volunteers said they came away from the trips feeling profoundly changed. Johnson believes reviewing their lifestyle choices while on the mind-expanding drug helped them summon the willpower to quit.

The researchers hope this could lead to treatments for other addictions.

As for that hookah-smoking caterpillar? He might finally kick the habit!