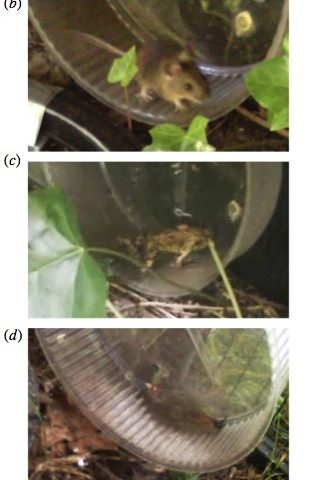 Running wheels aren’t just for pet hamsters. They’re lab tools—used, say, to study exercise in mice. But running literally in circles seems nutty. Indeed, many consider the behavior a neurotic byproduct of captivity. But is it?

Enter Johanna Meijer and Yuri Robbers from Leiden University. They decided to find out. How? By putting running wheels in nature! They installed two wheels in prime mouse habitat. They added night-vision cameras, triggered by motion detectors, to record any visits. And?

The wheels were used thirteen-hundred times over two years. That’s about twice a day. Indeed, mice used the wheels year round. And for one-minute-long sprints to eighteen-minute marathons! Clearly, wheel running is not an unnatural stress response. In fact, mice weren’t the only users. Rats, shrews—even frogs and slugs got in on the action! What?! And many critters made repeat visits. Animals seem to love running wheels!

What’s next for the woods? A giant ball pit and skeeball machines? So that’s why Chuck E. Cheese is grinning!