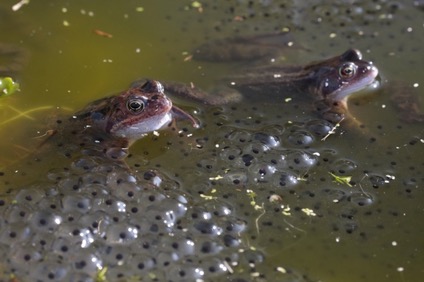 Talk about a Head Start program! Can eggs learn BEFORE they hatch?

American bullfrogs are like a virus. They can quickly spread and destroy a balanced ecosystem with their insatiable appetite. So why is it so hard to stop their growing population?

Most frog species are kept in check by bigger, hungry fish. But aquatic ecologists from Oregon State University discovered something RIBBITING about bullfrog embryos. And how they avoid becoming lunchmeat!

The researchers collected bullfrog eggs from a pond where they’re safe from predators.

Then, half the eggs were exposed to fish odor to mimic nearby predators. The other half didn’t get the fishy smell.

Results? Tadpoles that hatched in fish-scented water were BETTER at avoiding predators than the others. As soon as they hatched, they already knew how to hide from hungry fish!

This means they learned about the danger INSIDE the egg! Because of their early education, these tadpoles are better at adapting. And less likely to be eaten.

As to whether these bullfrogs will ever “croak”? Still unclear.