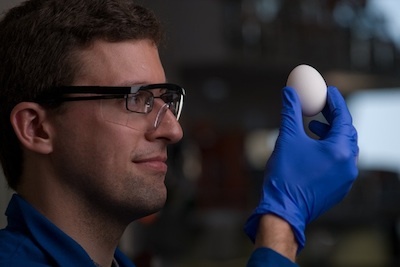 Can you UN-BOIL an egg? And why would you want to?

This is Sandra Tsing Loh with the Loh Down on Science, saying: Biochemists at the University of California, Irvine, can. As to why—? One word: Proteins.

Nowadays, proteins made in labs are used for everything from making cheese to treating cancer. But often, lab-made proteins clump together in useless balls. —And not even cheese balls! Then the clumps have to go into a detergent solution, to be dissolved into individual proteins over many, many hours.

Is there a better way? Based on their tests with egg-whites, the Irvine team says yes!

See, initially, egg-white proteins are clear. But when cooked, the proteins tangle and form opaque clumps.

The Irvine team added a chemical to boiled egg-whites that chewed up the clumps. Then they put the liquefied slurry into a device that spun it in thin films at thousands of RPMs. As it spun, strong shear forces untangled the proteins! The proteins then re-formed their clear, un-boiled shapes!

But can they do that for eggs cooked sunny-side-up? More lab tests, and perhaps some bacon, are needed.