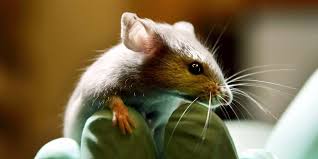 The Farmer’s Wife may yet be foiled thanks to researchers from Fudan University.

For sighted people, light gets picked up by cells in our eyes. These cells have sheets of pigment that absorb light. But some diseases break down that pigment, which leads to blindness.

Gengfeng Zheng and colleagues wanted to make their own pigment sheets. Where did they find their inspiration? At the beach!

We avoid sunburns by supplementing our natural skin pigments with sunscreen. Sunscreen absorbs dangerous light with tiny white particles. The scientists wondered – could they use sunscreen pigments to replace eye pigments?

To find out, they surgically replaced the blind mice’s pigment sheets with their sunscreen inspired version. The results? Their eyes responded to light just like sighted mice! They could see!

The scientists hope that this work will shed light on artificial eyes for blind humans.

Time to rewrite that old nursery rhyme! Next time the Farmer’s Wife will have to leave mouse hunting to the cats!