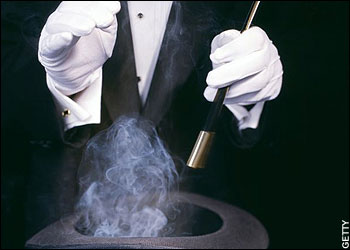 Now you see it, now you don’t!

This is Sandra Tsing Loh with the Loh Down on Science, saying….PRESTO!

Ever seen a magician make something… disappear? What’s the secret?  Magic lever? Hidden trap door? We know the disappearing act is always just that… an ACT. Until now!

Paul Kohl and colleagues from Georgia Tech wanted to make magic REAL. Many scientists have tried — and failed — to create disappearing materials. Kohl the Magnificent has done it! How?

He created a special polymer that can disappear on command! Although it doesn’t turn invisible, it disintegrates into thin air. The secret to its magic disappearance? LIGHT! The material stays intact in darkness, but when hit by sunlight, it immediately vaporizes.

Imagine a polymer domino line poised in a perfect circle. Light heats up only ONE domino to break the entire polymer chain. POOF! The whole thing disintegrates like…magic!

Kohl’s polymer has many potential applications. The military is already developing it for self-vaporizing parachutes and gliders.

Maybe this can make my dirty dishes… disappear!