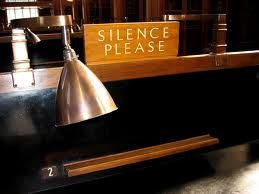 Does your inner Van Gogh need a special jam?

Music, food for the ears and the soul! Many claim that listening to music gets their creative juices flowing. But what if background music actually STUNTS the creative process?

Meet Emma Threadgold of the University of Central Lancashire. She and her colleagues had about thirty adults play a word association game. Participants had to verbalize a word linking three seemingly unrelated ones. They played three rounds with different types of music in the background. This included music in another language, instrumental tunes, and songs the players were familiar with.

The results? The gamers did best when there was little or no background noise! It didn’t matter if the music was happy or lyric-free. In fact, most folks did best when it was quiet as a library. Researchers thought silence led to success because it was the least distracting.

I guess I should do my Etch-A-Sketch to the OTHER sounds of silence!