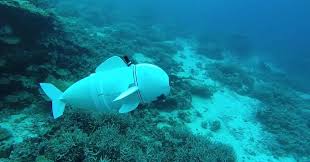 The catch of the day is….robots?

Luckily, robotic fish won’t be on menus any time soon. But they are making a splash in exploring the ocean— considered, by many, the last frontier on earth.

But now Robert Katzschmann and his team at M-I-T have developed a better robotic fish. Robofish swims just like the real thing! It continuously records video of surrounding aquatic life. From a distance, a diver can control robofish with a remote control, allowing it to blend in with other fish. Scientists can watch without getting in the way.

Robofish shows us how marine life thrives, and what threatens its health. By conserving ocean resources, we can protect marine life for future generations. Katzschmann’s next goal? Making schools of robofish to get even more eyes on sea life!