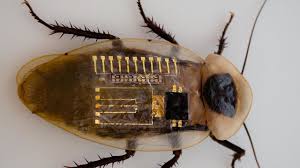 Are cockroaches lending a helping hand?

I know – technically cockroaches don’t have hands… But they do have legs, and they’re revolutionizing prosthetic limbs. How?

Yeongin Kim and colleagues at Stanford University have created an artificial nerve. It senses touch AND communicates with other nerves. It behaves just like real cells in our bodies.

How does it work? A series of sensors on the artificial nerve pick up on pressure applied to them. Kind of like the pressure on our fingers when we touch something. That sense is then converted into electrical pulses that mimic patterns produced by REAL nerve cells.

So, “thank you, cockroaches!” But you’re still not allowed in my house!