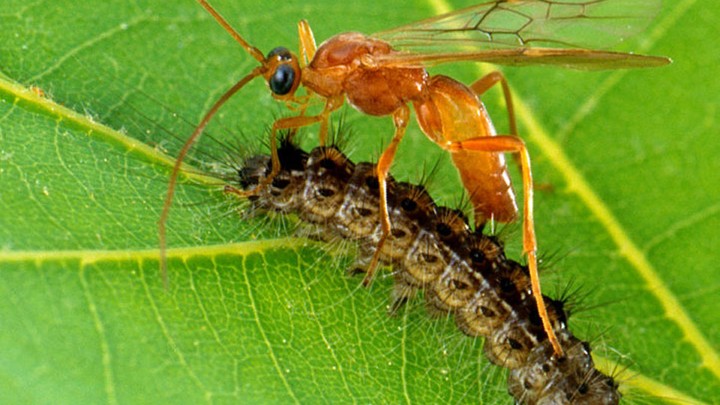 Caterpillars are cute, but not when they damage crops. Plants defend themselves by producing chemicals that attract wasps, a natural pest control. Wasps lay eggs in caterpillars, and hatchlings slowly eat the caterpillars from the inside out. Can caterpillars fight back?

Matthias Erb and colleagues from Switzerland threw an insect dinner party. Two groups of caterpillars munched on two different plants: smelly ones and not-so-smelly ones. The smelly plants had more wasp-attracting chemicals. Which caterpillars did the wasps prefer?

They went for the ones that ate the non-smelly plants. Turns out, the chemicals in smelly plants are bad for ALL insects. Caterpillars that ate a lot of the smellier plants became a toxic food source, thus repelling the wasps.

Learning how food chains work can help us protect our own crops from insects.

Thank goodness my burrito isn’t trying to kill ME… from the inside out!