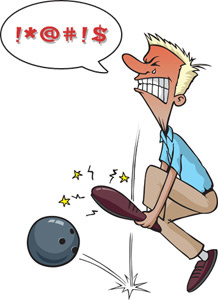 You stubbed your toe! Oh, fudge- Words you can’t say on the radio!

This is Sandra Tsing Loh with the Loh Down on Science asking: Why do we swear when we’re hurt?

In 2009, that’s what psychologists of Keele University in the UK wondered.

They led a study on the relationship between swearing and pain tolerance. Student volunteers were asked to keep their hands in ice water as long as they could. One group was allowed their choice of curse word. The other group had to keep things g rated.

On average, the cursing students kept their hands in water for 30 seconds longer!

But the story doesn’t end there! The researchers noticed that cursing didn’t help a small group of people.

Why? In a new study, they found that these people swore on a daily basis. The more frequently a person swore, the less profanity helped in preventing pain.

Oh ccccriminey! The take-away? Curse less. You might need that f-bomb for when you—ouch! Gah! Hit your dang elbow!