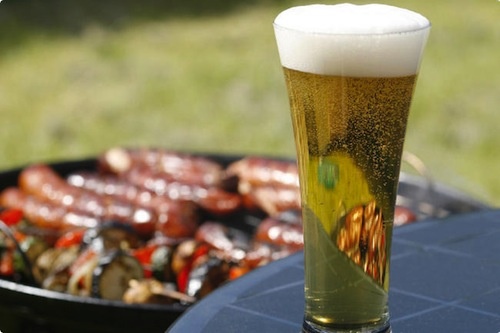 You know what our diets need more of? Beer!

Sure, barbecuing is fun, but it’s not really good for us. Boo! See, grilling produces nasty compounds called polycyclic aromatic hydrocarbons, PAHs for short. They are also found in car exhaust, and have been linked to colorectal cancer.

But now, Portuguese researcher Isabel Ferreira and colleagues have found a nifty way to cut PAHs: beer marinades! The team tested whether marinades made from either pilsner, non-alcoholic pilsner, or black beer could prevent PAHs from forming in charcoal-grilled meat. They did!

After marinating for 4 hours, grilled pork had significantly fewer PAHs than non-marinated pork. Black beer was the best, reducing PAHs by 53 percent, followed by non-alcoholic Pilsner at 25 percent.

How does beer do it? Well, PAHs are formed by oxidation. Turns out beer, particularly ales, is full of antioxidants. These make PAHs less toxic, and sometimes even stop them from forming at all.

So now beer is health food. That makes me very hoppy! So to speak.